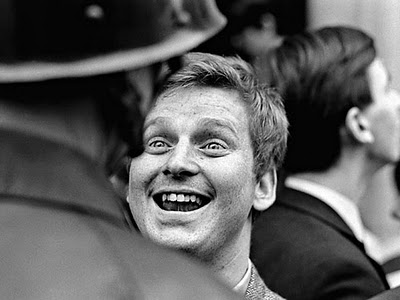 The success of Europe Ecologie in France and moderate advances elsewhere in the June European elections have emboldened the green right but disaster in Ireland, where the party was wiped out – and to a lesser extent in the Czech Republic – shows what happens when they abandon their principles for a shot at the big league.

Since the France’s Europe Ecologie triumph in the European elections, the European media have been talking of a Green wave across the continent, with leading member Daniel Cohn-Bendit’s gurning visage nigh on inescapable.

But the effervescent Cohn-Bendit has every right to be in an especially jolly mood – the result was indeed truly spectacular. It saw them soaring from the 7.45 per cent of the French vote in the 2004 EU elections and their embarrassing 1.57 per cent in the 2007 presidential elections.

D-Day of ecological politics
Cohn-Bendit christened the night ‘the D-Day of ecological politics’, leftwing daily Liberation called the result an ‘earthquake’ and saluted the victory of Cohn-Bendit ‘s green dream team alliance – bringing together the former soixante-huitard with, among others, alter-globalisation’s most famous farmer, José Bové. As well as crusading anti-corruption judge Eva Joly and the ex-chief of Greenpeace France, Yannick Jadot. Meanwhile, the Socialists abjectly conceded that the Greens had tapped into something profound among French voters that their own party had entirely missed.

‘The voters wanted to pass on a message,’ said Jean-Marie Le Guen, a

leading Socialist deputy, ‘a real concern for the future of our planet and a protest against the Socialist party for the way we are working today.’

The ecologists are now undoubtedly the third most powerful force in French politics, while on the back of the French results, the European Greens – the sole grouping in the European Parliament to boost their numbers in the election – are a player in EU politics as they’ve never been before.

New alliances
Immediately after the vote, Cohn-Bendit offered to form a domestic

President Nicholas Sarkozy, ignoring the divided far left, once comrades in arms to Greens and certainly to the mustachioed Bové on many an altermondialiste demo over the last ten years, but who scored far less than expected.

The Belgian co-leader of the European Greens and newly elected MEP,

Philippe Lamberts, said that the French model, which he categorised as

‘being able to link climate change to a credible economic vision and offering solid candidates’ should be emulated elsewhere across Europe and that it was high time for Greens to abandon the leftwing ghetto.

Lamberts, who is also a sales executive for IBM in charge of the automobile, aerospace and arms industries in southwestern Europe said, ‘This was the recipe for success in France. In Italy, it’s very sad that we lost our seats there, but they could not link their green vision with the economy. They couldn’t do this because they allied themselves with the extreme left.

‘They did it this time as they did last time, and the track record shows that when you ally yourselves with the extreme left, you never move beyond three to five per cent.’

But beyond France, the European results for the Greens were uneven. In a number of countries they made slight advances, but, crucially, in two countries where they were in a coalition government, the night was a debacle.

In Denmark, the party upped its representation from one to three MEPs and gained an extra seat in Belgium, Germany, Greece, Finland and Sweden. In Sweden, the Greens became the third-largest party. In the UK, they managed to significantly increase their support to 8.6 per cent. But the party was not able to translate this into any additional seats.

On the European level, the German Greens made only a moderate advance overall – from 11.9 per cent to 12.3, but sharply strengthened their position in urban areas. In Berlin, the party won almost a quarter of votes and in the hipster-friendly district of Friedrichshain-Kreuzberg, the Greens achieved a remarkable 43 percent.

The metropolitan result in Germany has emboldened the more conservative ‘Realo’ wing of the party. In the days after the vote, Boris Palmer, the Green mayor of Tuebingen, said the future was a coalition with the conservatives at a federal level: ‘We must become stronger than the [centrist] Free Democrats, to make us the only alternative for the Christian Democrats to the grand coalition.’

Germany’s Der Spiegel magazine asked Cohn-Bendit after the vote to fill in the blanks to the following question: ‘If a partnership with Angela Merkel’s Christian Democrats makes sense …?’

To which he replied: ‘Then we will do so. Anything else would be nonsense.’

European Greens also lost two seats in Italy, and one in Spain. While Austria’s Die Gruenen held on to their two seats, it dropped from 12.9 to 9.5 percent.

And in Ireland, where the Greens are in government with the centre-right Fianna Fáil, the party was pulverised, winning not a single MEP and losing almost all their council seats in the local elections running on the same day – from 18 down to three. They were also locked out of Dublin city council, long their strongest bastion.

Similarly, many in the European party had expected the Czech Republic to be a beachhead for Greens in Eastern Europe, where it is notoriously difficult for environmentalists to win favour. The party there, Strana zelených, had been in a coalition government as well and had even won the endorsement of anti-Communist hero Vaclav Havel and the outgoing foreign minister Karel Schwarzenberg. Ultimately, the Czech Greens, which have six seats in the current parliament and a single senator, were relegated to the margins. They dropped from 6.3 per cent in the 2006 legislative elections and 3.16 in the 2004 European ballot to just two per cent in 2009, far from enough to win a seat at Strasbourg.

Progress or a step backwards?
But while certain leaders may have thought that a pragmatic participation in right-wing coalitions would lead to a recognition of Greens as a serious party of government, the move has backfired -alienating many of their progressive middle-class supporters and blocking all possible advances among workers and the poor.

In June 2007, in Ireland, the Greens entered a coalition with the centre-right Fianna Fail and the free-market Progressive Democrats. Although it is not fair to say that the Greens have been held as responsible for the economic collapse of the last year as have the senior coalition partners, their abandonment of key pledges and issues that symbolise Green politics is widely agreed as the explanation for their electoral wipe-out.

Ahead of the coalition agreement, the Greens had been outspoken opponents of plans to build the M3 motorway through the Tara Skryne Valley, one of Ireland’s most important archeological landscapes. But since then said next to nothing on the subject as the government moves ahead with its scheme, provoking Save Tara Campaign activists sporting cigars and fat-cat suits to mount a protest outside Green Party headquarters last September.

The party once vocal about plans to construct a Shell gas pipeline and processing plant in Mayo has been equally silent on the matter since joining the government.

In 2007, Green junior minister Trevor Sargent even fudged on the question of genetically modified organisms, saying that the party’s long-standing opposition was in reality ‘not about banning imported GM feed’.

Meanwhile in Dublin, the party that ostensibly is for expanded public

transport has overseen cuts to bus services. And the swingeing cuts to public services and levies on workers that are the government’s response to the economic crisis have provoked some of the largest protests in decades – and cannot have endeared the party to much of society.

But despite their European and local debacle, the party appears to remain committed to staying within the governing coalition rather than withdrawing their support, mainly because this would precipitate a general election in which they are sure to be routed.

Equally, in the Czech Republic, the coalition in which the Greens participated until the collapse of the government in March, two years ago provoked some of the biggest demonstrations in the country since the democracy protests of 1989. Unions, students and pensioners came out en masse against savage cuts to social programmes and tax increases for working people that were to enable business taxes to be cut from 24 per cent to 19 per cent.

The party has also backed plans for the US missile defence system tobe installed in the Czech Republic, despite the effective abandonment of the strategy by Barack Obama. Opponents within the party to such policies, including plans for healthcare privatisation, have been expelled – notably two deputies in the lower house.

Despite the victory in France, the real lesson of the June European ballot lies in the worrying statistic showing these elections to have achieved the worst turnout on record, at 43 per cent on average across the EU. Abstention rates were similar in France and particularly high amongst working class voters. Moreover, while Europe Ecologie did well among the young people who voted, youth as a whole was the second largest category of abstentionists.

According to French pollster TNS-Sofres, 32 per cent of managers and those from the ‘intellectual professions’ (to use the French pollster’s own categorisation), as well as 24 per cent of those in the ‘intermediate professions’ backed Cohn-Bendit’s outfit, while just 13 per cent of workers who voted backed the list. This was particularly pronounced in the industrial north, historically a Communist bastion.

This has led commentators to, perhaps not unfairly, describe the Europe Ecologie voter as essentially ‘bobo’ – bourgois bohemien – the French term for middle-class lefty arty types.

Thus any shift to the right on a European level, naively mimicking the

Irish and Czech trajectory, risks a loss of these core wealthier but progressive voters. At the same time ignoring the great oceans of voters in which they could fish, and increasingly abstain or worse – plumping for the anti-immigrant right – who have been without a voice for decades since social democracy took its neo-liberal turn.

On June 8, social democrats across Europe woke up to an electoral cataclysm largely as a result of their failure to articulate a vision that was in any way markedly different from the market fundamentalists that brought about the crisis.

If Greens follow the same path, they are in peril of unwittingly wandering into the same parliamentary desert.