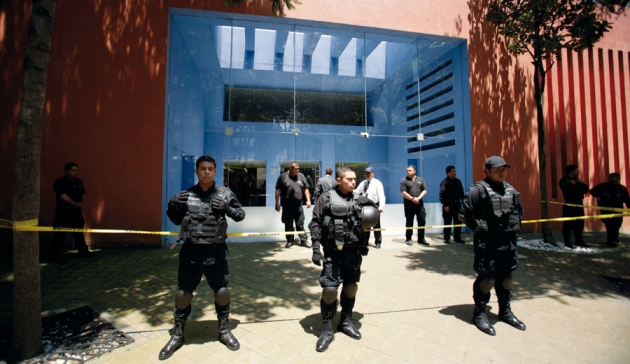 This piece was short-listed for the 2013 Association of British Science Writers award for Best Feature. The Nature podcast for 30 August also interviewed me about the topic (at the 13:50 mark), and I authored that week’s editorial on the same subject.

The shoe-box-sized package was addressed to Armando Herrera Corral. It stated that he was the recipient of an award and it was covered in official-looking stamps. Herrera, a computer scientist at the Monterrey Institute of Technology and Higher Education in Mexico City, shook the box a number of times, and something solid jiggled inside. What could it be? He was excited and a little nervous — so much so, that he walked down the hall to the office of a colleague, robotics researcher Alejandro Aceves López, and asked Aceves to open it for him.

Aceves sat down at his desk to tear the box open. So when the 20-centimetre-long pipe bomb inside exploded, on 8 August 2011, Aceves took the full force in his chest. Metal pierced one of his lungs. “He was in intensive care. He was really bad,” says Herrera’s brother Gerardo, a theoretical physicist at the nearby Centre for Research and Advanced Studies of the National Polytechnic Institute (Cinvestav). Armando Herrera Corral, who was standing nearby when the bomb went off, escaped with a burst eardrum and burns to his legs.

The next day, an eco-anarchist group calling itself Individuals Tending Towards Savagery (ITS) claimed responsibility for the bombing in a 5,500-word diatribe against nanotechnology that it published online. Police found a charred copy of a similar text in the detritus of the explosion. The bombers said that Herrera had been targeted for his role as director of the technology-transfer centre at the Monterrey Institute of Technology and Higher Education (commonly known as Monterrey Tec), “one of the major universities that has staked everything on the development of nanotechnology”. The text talked of the potential for the field to cause environmental “nanocontamination”, and concluded that technology and civilization as a whole should be held responsible for any environmental catastrophe. Chillingly, the bombers listed another five researchers at Monterrey Tec as presumptive targets, as well as a further six universities. END_OF_DOCUMENT_TOKEN_TO_BE_REPLACED